Throughout the year, G4 Pro rides allow you to discover the hidden roads and rides of the Côte d’Azur plus great places to stop for coffee. You’ll also discover great places as we travel many kilometers to share with you the cycling heritage of the Cote d’Azur. Today, we’re telling you about a typical Pro ride that’s not known to the general public, even though it’s a very attractive ride with many attractive places en route and a unique summit. This is the Mont-Vial ride.

As usual, we start in Saint-Laurent-du-Var, HQ of the house of G4. This town is well known to cyclists because it’s at the junction of so many different rides and has to be crossed by cyclists from Antibes, Nice and Monaco who want to ride to the Var Valley and the Mercantour Park. We climb up the Fanestock Corniche, a fabulous road that overlooks the whole of the Var valley, to reach the charming village of Saint-Jeannet with its famous Baous. The Quatre Chemins café is a well-known haunt of cyclists and the ideal spot for a morning coffee if you’ve not eaten breakfast. You won’t be the only cyclist there! We continue in the direction of Gattières before taking the road to the perched villages, firstly Carros Village, then to Le Broc, and finally to Bouyon where we branch off in the direction of Roquesteron. These three villages are magnificent not only because of their architecture but also because of their position, dominating the impressive valleys of the Var and Esteron. A quick stop in Bouyon to fill up our bidons and we head towards Roquesteron, where we already have a breathtaking view of the difficulty ahead, the Mont-Vial which rises to more than 1500m. Today, the weather is a bit mixed and we hope it’ll stay dry during this exciting ride. The road from Bouyon to Roquesteron provides us with a breathtaking vista down the Esteron valley where you’ll ride through little-known villages such as Ferres and Conségudes before finally reaching Roquesteron, a legendary, historical village. Here you’ll be able to refuel yourself particularly those who are already feeling peckish or who need another hot of caffeine. We then head into the Esteron Valley towards Gilette. This time of year, it’s a lush green valley and a nice quick road to enjoy before attacking the main difficulty of the day. 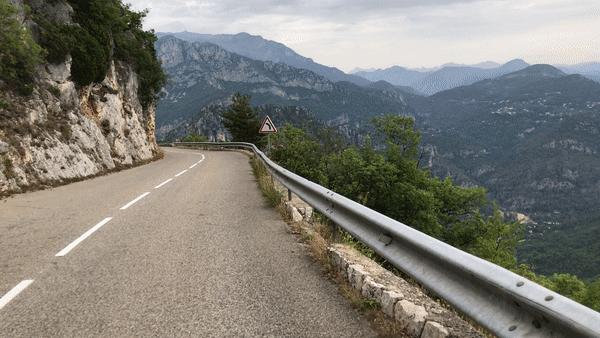 A few kilometers into the Esteron valley, you take the fork towards Toudon, it’s sign-posted. And from there, 10km ahead awaits a small plateau. It’s a climb known only to the locals and cycling connoisseurs, because it’s narrow and generally unknown to tourists and the general public. You’ll ride in a magnificent setting, under Mediterranean pines, but watch out for the gravel which builds up at the side of the road and could puncture your tyres. Once you’ve reached Toudon, you’ll easily see the Mont-Vial climb which until now has merely been a teaser. Don’t forget to refuel in Toudon! You’re now only 2km from the foot of Mont-Vial – the Anglieru of the Côte d’Azur, only smaller. Follow the signs and good luck! Ramps of up to 18% await you during the 7km climb. The road’s in poor condition and this’ll slow down your ascent. But the effort’s worth it just for the incredible view of the Mercantour Park and the sea in the distance. Unfortunately for us, it was rather overcast but we’ll return as soon as the weather is fine to enjoy this incredible view in between the sea and mountains. Congratulations, you have reached the top but the descent is equally difficult. The steep ramps and the poor condition of the road make it very dangerous. Don’t take risks, descend carefully, and take your time until you arrive back in the beautiful village of Gilette. Then there’s just the final effort to return to Saint-Laurent-du-Var and Nice via the cycle path that runs along the river Var. If you’re lucky, you’ll have the wind in your back, if not it’ll be a headwind, a final opponent for this ride of discovery. Keep cycling!

One thought on “PARCOURS PRO #2: THE MONT-VIAL”