TheTour of Spain is one of the three Grand Tours that take place over three weeks. When it began in 1935, 100 riders raced for about 3,000km over 20 stages. Nowadays, due to the progression of cycling, there are almost 200 riders at the start of this Vuelta. Originally held during May, since 1995 the Vuelta, the last of the Grand Tours, takes place at the end of summer, just before the World Championships. Like the Tour de France which finishes in Pais on the Champs Elysées, the winner of the Vuelta is traditionally welcomed in the streets of Spain’s capital, Madrid.

The Vuelta is probably less well-known than its two bigger brothers, the Giro (Tour of Italy) and the Tour de France. This may be due to rather less media coverage, fewer spectators, but more likely because it takes place towards the end of the season. The more prestigious riders often don’t ride the Vuelta. Nevertheless, it remains a sure fixture and its winners are always world class racers. The World Championships usually take place a couple of weeks after the end of the Vuelta which makes this race good preparation for that event. A goodly number of World Champions have participated beforehand in the Vuelta. 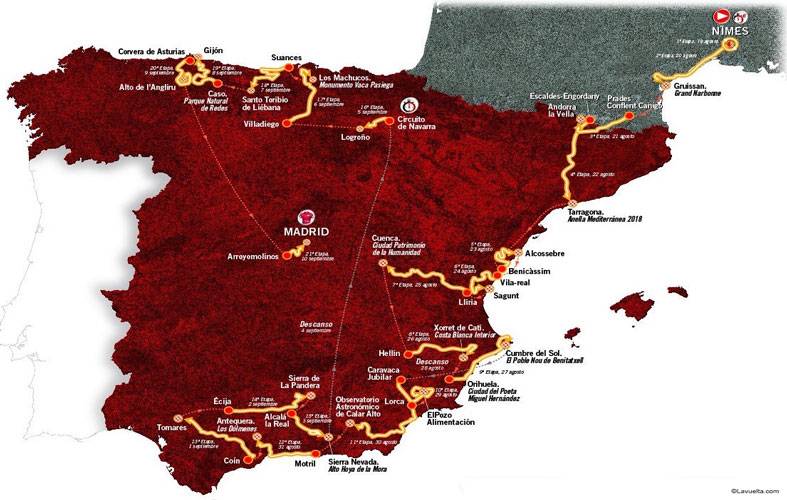 Part-acquired by A.S.O. in 2014, it’s now 100% owned by the sports organisation behind the Tour de France and other prestigious events. The Vuelta is often the most difficult Grand Tour as its organisers have typically chosen increasingly complicated parcours with climbs where there are ramps with gradients in excess of more than 20%. Moreover, it’s not unusual for it to have up to 10 summit finishes. That, along with temperatures around 40°C, makes it the most difficult of the three-week tours.

Geoffroy Lequatre, founder of the G4 brand and ex-professional cyclist, thrice took part in the Vuelta. He recounts one of his many memories from riding on Spanish roads:

“In 2011, the start was in Benidorm, in the Province of Alicante, and we raced the length of the southern coast of Spain before returning to Cordoba. It was like an oven, it was 45°C. In such conditions-là, kit, hydration and nutrition are your only friends.

That year, following the setting up of our G4 brand with innovative products, I was under contract with RadioShack, Lance Armstrong’s team. I was able to ride with a pair of our active compression socks which meant I didn’t suffer from over-hot feet or any chafing.

The kit is an essential part of the armoury of a pro cyclist. The team that invests time in this particular part of its performance will, I am convinced, be more competitive than those of its competitors. In particular, G4’s USP is its rainwear and warm weather kit. Our feather-light jersey with increased breathability and UV protection makes it significantly different from other brands’ products. If only I could have ridden in such kit at this time, I would have been more comfortable and much more effective. G4’s other USP is the comfort of its shorts, especially the hypoallergenic and breathable chamois, another considerable competitive advantage. It wicks away moisture to prevent chafing in the nether regions. Also, the shorts’ seams are carefully positioned to avoid chafing and irritation. These features are fantastic benefits particularly during three weeks with an average of 180km per day and at least 5 hours in the saddle!

In these major events, such as the Vuelta, during the three weeks it’s important to manage your recovery, hydration and diet. All of this would take more than one blog article to fully explain. You need to understand that adequate hydration on hot sunny days means you’ll avoid cramping. On average, you can drink 12 bidons (65cl) during a race which adds up to around 7ltrs of water and isotonic drinks. Nutrition comprises energy gels and solid foods such as energy bars or small sandwiches. Post-race recovery is equally important. Hydration in small doses after the large amount you’ve drunk during the race because you no longer feel thirsty and too much will give you a stomach ache. Post-race food can often include some fruit and, if you’re lucky, some well-balanced cakes such as those which Sheree makes, to help make recovery more pleasurable. You certainly need something to pick you up. Sheree often prepares some of her healthy cakes for the riders she knows to replenish their calorie deficits.

This Vuelta is bound to be exciting. The last grand tour of the cycling season starts this weekend, watch it on Eurosport with Steve Chainel, the founder of the cyclo-cross team for which G4 provides its cycling wear.”